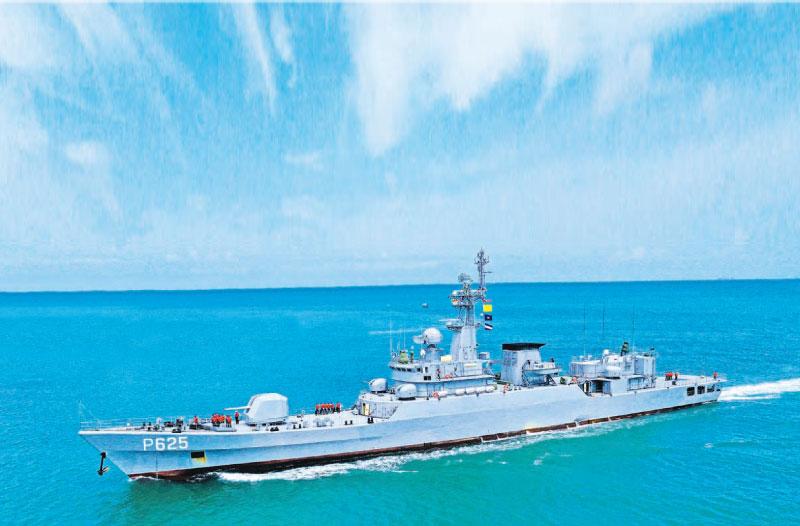 Over the past decade, the Sri Lanka Navy has steadily enhanced her fleet and her deep sea patrolling capability. I went onboard the magnificent frigate class advanced offshore patrol vessel SLNS Parakramabahu. Cruising at a speed of 25 knots, skimming through the waves she is indeed the queen of the naval fleet. The view from her formidable defensive bridge and deck is simply amazing. 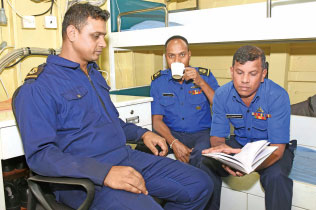 I met with her Commanding Officer Captain Nalindra Jayasinghe, who is one of the highly decorated young men in the navy. He explained “This vessel was donated to us by the Peoples Republic of China. In order for our crew to get used to operating this magnificent frigate we reached China two months in advance. Our officers and sailors were given an extensive training onboard and we were ready to sail her back to Colombo. We left Shanghai Harbour on June 25, 2019 and reached Colombo Port on July 8, where she was welcomed in accordance with naval traditions.

This long voyage was a great experience for our crew as we covered 4013 nautical miles”. The frigate presently has a crew of 160 including 21 officers. She was ceremonially commissioned in August 2019, with much pomp.

SLNS Parakramabahu has an imposing and intimidating structure. The frigate is 112 metres long and has a beam of 12 metres. She has a sailing displacement of 2300 tons. When this vessel deploys to the deep sea she has an endurance of 15 days (which equals to 3500 nautical miles). 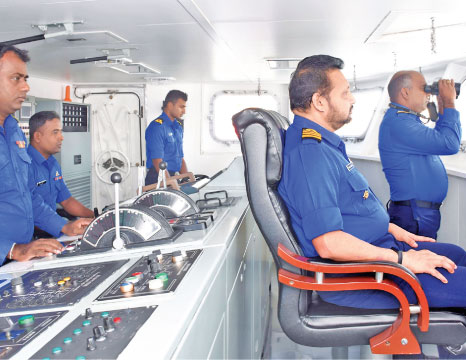 Lieutenant Commander, Andrew Wijethunga, the ships Navigation Officer showed me the complex network of computers which guide this massive vessel. In order to enhance her combat capability the vessel is armed with a surveillance radar, which can pick up other vessels and objects at a range of 150 kilometres. This is important for the crew who are tasked with identifying and intercepting suspicious vessels which maybe transporting narcotic cargo. The deep sea patrols also act as a deterrent to trawlers involved in human smuggling.

We climbed down a flight of steps through a series of hatches and came to the front deck where the main 100mm gun is positioned. This automated firing control system is the first and most advanced in the naval armament. The main gun with its twin barrels can traverse and elevate according to the information processed from the firing control room located inside. This secure area is the domain of the gunnery officer.

I was able to witness the most advanced naval computers onboard. This system is further enhanced by the long range surface and air surveillance radar which can accurately guide the shells to the desired targets. Unlike the older vessels there is no need for any crew to be exposed on the outside turret. With her four stabilisers the new frigate offers a stable platform in any sea condition. The firepower is further enhanced with four 37mm twin barrel guns augmented with optical aiming devices. 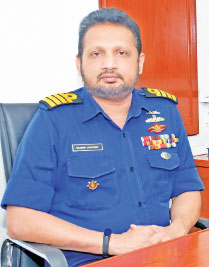 We proceeded next to the main engine of the SLNS Parakramabahu, along with electrical engineer Lieutenant Commander Thilakeratne Bandara. The vessel has four floors above its water line and another floor below the water line. The ships propulsion is generated by two 390 VA engines and two fixed pitch propellers. On every deep sea patrol a navy doctor sails with the crew. The modern sick bay has the latest medical technology. In the recent past the sailors were able to rescue many fishermen lost at sea owing to rough weather and the humble fishermen were given medical treatment onboard. Like in all naval vessels the young sailors and officers were engaged in their daily ship’s routine, practicing their fire drills, man overboard drills and replenishment at sea and such like. The SLNS Parakramabahu is fitted with a helicopter landing pad. 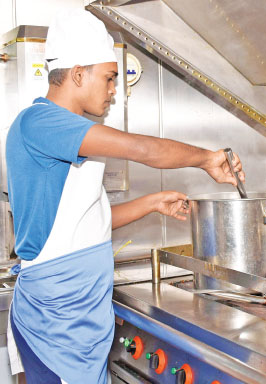 Each branch has a task to do at sea. We walked into the galley-the naval term for kitchen. Four cooks were preparing a meal of rice and curry. The SLNS Parakramabahu has a modern kitchen. The catering crew made their very own bread whilst at sea, which was nice being hundreds of miles away from shore. Drinking water is obtained by a reverse osmosis plant which can transform sea water into clean drinking water. This frigate can generate 15 tons of clean water daily. Young sailors displayed their teamwork, going about their routine. I met some senior sailors holding the rank of Master Chief and Chief Petty Officer. These sailing veterans act like fathers to the young men, guiding them professionally. Teamwork and wise decision are hallmarks of naval life, because once you leave the harbour you have to endure and meet every unexpected challenge, including the ocean’s changing weather patterns.

The sailors narrated stories of sighting whales and dolphins from their long voyage from China to Colombo. Incidentally, the vessel’s crest displays an Orca whale- a symbol of strength, intelligence, power and longevity along with an anchor denoting naval security and stability. As I gazed up from the helicopter -deck the flags were fluttering on the main mast. The SLNS Parakramabahu has certainly given the navy a magnificent boost to enrich her sailing capacity.