Bricks are easier to throw than bouquets. Sri Lanka’s Security Forces sadly have never got the accolades they deserve. They never will. Being grateful doesn’t fit into the scheme of things. Every time well-funded campaigns nit-pick on what they didn’t do ignoring all that they did. 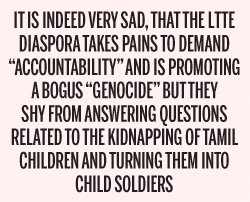 Of these almost 12,000 LTTE combatants were 545 LTTE child soldiers. The President considered them victims of the LTTE and gave them a presidential pardon, another first. No foreign government has looked at the humanitarian side of the terrorists – even child soldiers. These 545 became the last of batch of Tamil children who were kidnapped and turned into child soldiers by Tamil militants.

None of the so-called Tamil leaders in the political scene today uttered a word against the LTTE and its recruitment of child soldiers. Today, the bellow in Parliament, but they did not even donate a bag of rice to the refugee camps following the end of the conflict.

While in the international arena, other than writing fancy reports – what did the UN, its rapporteurs, UN agencies for children and women or the human rights organisations do to stop LTTE child soldier recruitment from 1970s to 2009?

Do their reports reveal how many Tamil children between the ages of 7 to 18 years ended up kidnapped by the LTTE?

Do their reports highlight from what homes these kidnapped Tamil children came from?

Do their reports reveal how many got killed since 1970s by the LTTE during training or by the LTTE while trying to flee training? How many fleeing children did the LTTE shoot to death?

Do their reports cover the horrendous training they had to undergo in the thick jungles?

Do their reports cover the deaths of these children, trained to hold a gun and shoot at a national army?

Do their reports reveal how many child soldiers died at the hands of the LTTE while trying to flee during the last phase of the battle?

Do their reports cover how many Tamil children have died biting the cyanide capsule and committed suicide?

Have any of these international entities raised the demand for justice against the LTTE for these war crimes against children? 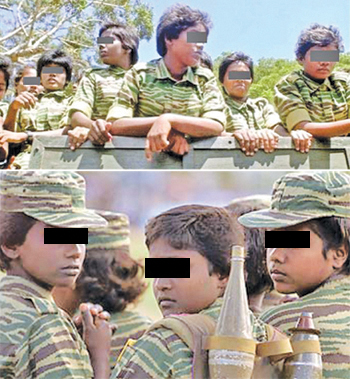 It is indeed very sad, that the LTTE Diaspora takes pains to demand “accountability” and is promoting a bogus “genocide” but they shy from answering questions related to the kidnapping of Tamil children and turning them into child soldiers or justice which will invariably turn to their accountability for aiding and abetting child soldier recruitment.

The LTTE Diaspora and their supporters in Sri Lanka are also shy to answer the question what type of homes these children were kidnapped from?

They were kidnapped from low caste and impoverished homes – parents who were too poor to even travel to a police station to complain, parents too scared to say anything against the LTTE, parents too poor to feed their children that they thought joining the LTTE would make their life better.

The ordeal these Tamil low caste and poor children went through is factual and nothing like the made up stories of genocide by the LTTE rump overseas.

Why don’t the LTTE Diaspora celebrate the LTTE children during these memorials?

They dare not do so because it impacts negatively on them. The LTTE will never highlight the child soldier regiments because it is a black mark on them. Notice how LTTE fronts have never covered any child soldier in their wailings about supposed killings by the Security Forces.

The LTTE was an armed movement – they cannot expect the Sri Lanka Security Forces to be firing roses. The LTTE was an armed non-state actor in uniform and a clear hierarchy. If the LTTE is firing with aim to kill, the LTTE must expect the return. However, the scenario LTTE fronts are presenting to the world is that they were an innocent group of people getting shot at by the Sri Lankan Security Forces. Obviously, the world is oblivious to its list of crimes and any international body holding roses for the LTTE should seriously look up the LTTE’s crimes first.

The majority of Tamil community comprises low caste and poor. The LTTE used their own children to acquire international status as a terrorist outfit. The LTTE had armed units comprising child soldiers.

These children lost their youth, they lost their childhood, they were denied education, freedom of movement and the right to live in a happy environment with their parents. No one can measure this loss.

Tamil children and their parents did not have to fear walking to school or returning home from school to get kidnapped on the way and taken to a thick jungle hide-out where they were training in combat operations, taught how to commit suicide and given a gun to kill. The Security Forces saved Tamil children and they deserve more than bouquets for this.